Can Thinking About How We Think Make Us Better Investors?

As humans, most of us have biases and cognitive errors that can play a role in our investment decision-making, but we also have the unique ability to analyze our own thoughts.

The psychological phenomenon that leads to anomalies and inefficiencies in the market, such as the tendency to overreact to bad news (De Bondt and Thaler), and momentum trending (Jegadeesh and Titman) may create opportunities for outperformance. Behavioral finance attempts to understand the divergence between what rational models of economics and finance predict and what actually occurs, by observing how investors behave. Recognizing certain psychological tendencies can help us avoid common errors in judgment that may put achieving your financial goals at risk.  To explore this, we’ll take a closer look at a few of these common proclivities:

Daniel Kahneman and Amos Tversky illustrate this with the following example:
Given a 50% probability of winning $150 and a 50% probability of losing $100, is an individual likely to take this gamble? The answer is no, their experiments show that most people will not take a gamble unless the possible gain is at least 2x greater than the potential loss. 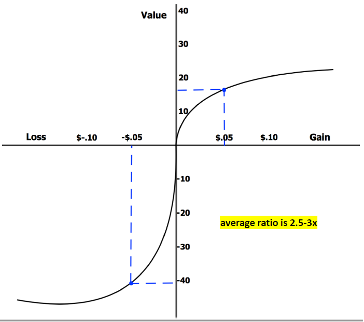 We know that mathematical models based on logical reasoning alone do not consistently predict how the economy or stock market will perform. Using technical analysis can help identify trends in the market and capitalize on anomalies. Macro and fundamental analysis is a rigorous way of conducting due diligence and objectively incorporating relevant information into investment decision-making. This is enhanced further by being aware of our own personal biases and having an advisor who can help us recognize and avoid them.

Our investment process blends Technical, Macro, and Fundamental Analysis investment principles into a focused strategy.  Contact us if you'd like help bringing all three perspectives together to take a more thorough and prudent approach resulting in deeper insights for the long term.

Sources:
Jegadeesh and Titman. 1993. “Returns to Buying Winners and Selling Losers; Implications for Stock Market Efficiency”
Kahneman, Daniel, and Amos Tversky. 1979. “Prospect Theory: An Analysis of Decision under Risk.”
Joyce, Edward G., and Gary C. Biddle. 1981. “Anchoring and Adjustment in Probabilistic Inference in Auditing.”
Butler, Stephen A. 1986. “Anchoring in the Judgmental Evaluation of Audit Samples.”
Thaler, Richard H., and Eric J. Johnson. 1990. “Gambling with the House Money and Trying to Break Even: The Effects of Prior Outcomes on Risky Choice.”
BL=https://www.bakerave.com/insights-impact/blog_enteries?t=behavioral-finance